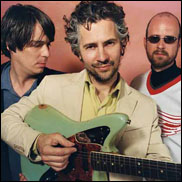 PALM BEACH, FL (CelebrityAccess MediaWire) — The Flaming Lips have been forced to scap an appearance at this year's Sunfest, due to the hospitalization of the band's lead guitarist Steve Drozd.

The Lips had been on the bill as a closer for the festival, along with ZZ Top, the Palm Beach Post reported.

"We regret any inconvenience that this may cause. The performance of any band is in the hands of the artists, not the festival. As a result, our longstanding policy is that the schedule is subject to change and no refunds will be given for festival tickets. Festival tickets are good for any one day of the five days." said Sunfest spokesman in a statement.

The reasons for Drodz' hospitalization and the seriousness of his condition were not disclosed but sources close to the band told Entertainment Weekly that it wasn't serious.

Although the Lips won't be at Sunfest, the police union will be there to protest after planning a boycott of the festival but then being ordered to work the event, despite the Police Union and city of Palm Beach failing to reach a deal on a contract.

"We know the economy's bad out there and we went to the leadership and said, 'Listen, we don't expect any raises,' but instead we came with some proposals to bring the budget down in the police department, and it fell on deaf ears," Police Benevolent Association President John Kazanjian told the Palm Beach Post. – CelebrityAccess Staff Writers