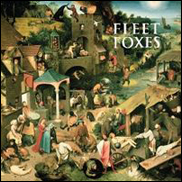 SEATTLE (Hypebot) – One of the breakout indie bands of 2008 was Sub Pop's Fleet Foxes, and the band openly credits online piracy for providing both inspiration and a promotional boost for its 200K+ selling debut album.

As much music as musicians can hear, that will only make music richer as an art form," singer Robin Pecknold told the BBC. "I think we're seeing that now with tons of new bands that are amazing, and are doing way better music now than was being made pre-Napster."

"I've downloaded hundreds and hundreds of records – why would I care if somebody downloads ours? That's such a petty thing to care about," says Pecknold. "I mean, how much money does one person need? I think it's disgusting when people complain about that, personally."

On recent rumors that the band was signing to Virgin, Pecknold wrote in a blog post:

"Fleet Foxes will never, ever, under no circumstances, from now until the world chokes on gas fumes, sign to a major label. This includes all subsidiaries or permutations thereunder. Till we die.”

"I just don't see the point. Most major labels seem anti-music. We've pursued no such deal with Virgin (or been pursued to my knowledge, I think it was just a bit of news they reported) and would be idiots to be unhappy with our fam of label folks. It is true though that all copies of the CD LP will now include a free copy of the EP (like it is currently with the vinyl), but that's not a 'special limited edition,' it'll be that way in perpetuity, no extra cost or packaging change." (via Exclaim!)