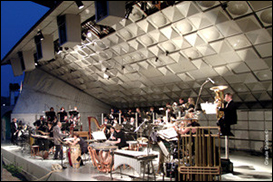 (CelebrityAccess) — A stainless steel barge designed by the late and much-feted modernist architect Louis Khan as a floating concert hall is headed to the scrapyard by the end of the month.

Khan originally designed the barge named Point Counterpoint II for his friend and his friend and conductor Robert Austin Boudreau, and the Pennsylvania-based American Symphony Orchestra, who use the boat for floating river side concerts in towns and cities without their own orchestras.

However, Boudreau, who is now 90, is longer able to maintain the vessel and has failed to locate a new owner for the ship and if that doesn't change, according to a report in the Architect's Newspaper.

While the barge appears to be headed for a New Orleans wrecker, it still has allies and supporters, including world-renowned American-French cellist Yo-Yo Ma, who, in a letter to the New York Review of Books, described the barge as a "vibrant ambassador."

"Anchoring in large cities and small towns, in busy shipping lanes and at public parks, the barge opens like a clamshell to reveal a glittering concert stage," Yo Yo Ma wrote in the letter which will appear in the August edition of the publication.

"It sails as a powerful, living testament to American creativity and to the elemental role that culture plays in human life," he added.