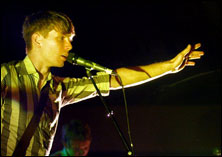 PARIS (CelebrityAccess MediaWire) — According to NME.com, the lead singer of Franz Ferdinand, Alex Kapranos, got into a backstage scuffle with the band’s guitarist, Nick McCarthy, and drummer, Paul Thompson.

The band had been touring for almost a year when on November 4th the stress became too much. The group played a show at the Zenith in Paris before heading to their French record label to be presented with a disc commemorating their French album sales. After the presentation an argument broke out between band members which escalated into violence.

“As far as I know there was a punch thrown at Nick by Alex,” a source within the band told NME.com. “…they’ve grinned and bared it and got the discs, and then the tension was still there… I think the actual brawl went on behind closed doors though. There was one swing and a lot of huffing and puffing, kicking things around in the dressing room.”

A spokesperson for Franz Ferdinand told NME.com it was all part of being a band on the road. “There’s no depth to it, minor issues take on more significance when you live in each others’ pockets for a year. The tiredness from traveling doesn’t help either. Every band I’ve worked with has had something like this, it’s like family life. Bands fall out, families fall out. It’s the dynamic of being in a band.” –by CelebrityAccess Staff Writers