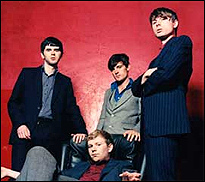 (CelebrityAccess MediaWire) — Scottish rockers Franz Ferdinand have turned down the opportunity to take part in a £30 million advertising campaign in the United States, for fear of ruining their rock and roll credibility.

Shortly after Jack White’s Coca-Cola advertisement was shown to the world, the indie pop rock group was approached to endorse an unnamed product in what would have been a massive deal. Even though it’s estimated that the campaign could have quadrupled sales of Franz’s last album, “You Could Have It So Much Better,” frontman Alex Kapranos told Scotland On Sunday that the group has no regrets.

“They wanted to do this huge thing that was going to have $50m spent on it. It would have meant we sold four times as many copies of the album, just from the extra exposure it would have got. But the advert meant we had to completely surrender all of our identity and integrity to this product that was being advertised,” Kapranos said.

“It wasn't Coca-Cola or anything like that. It was just a thing that needed some music associated with it. We just had to say no because of the gut reaction. It wasn't because we didn't want to sell more records. It was just because it didn't feel right,” he continued. “We'd have been completely surrendering if we had done that. We'd be lost. You can just tell with stuff like that – you can tell when you're doing something bad. We probably hacked off quite a few people by not doing it. But as ourselves we felt a lot better about it.”

Franz Ferdinand is currently getting set for a summer European tour, that will make stops at multiple festivals, including T In The Park, the Exit Festival, the Oxegen Festival, Benicassim, and the Fuji Rock Festival. –by CelebrityAccess Staff Writers