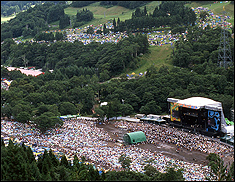 (CelebrityAccess MediaWire) — The Fuji Rock Festival 2005, held at the Naeba ski resort in Niigata prefecture, Japan, drew its largest crowds ever with about 125,000 total attendees over the three day concert.

Saturday brought more than 40,000 people to the show, according to organizers Smash Corp., with headliners Fatboy Slim, Beck and Dinosaur Jr.

The show was set up with 8 stages spread over several kilometers separated by woods. Severe weather in the days before the show, as well as multiple rain showers during the weekend, made trekking between stages through the mud the only downside of the festival, according to most fans.

Smash Corp. decided to change its policy of selling only three-day tickets, to encourage camping and treating the festival as a full lifestyle experience, after 2004’s concert did not turn a profit. Their decision was rewarded by sold out single day tickets on Saturday, and 15,000 passes selling at the door on Friday. All of the three-day tickets for the event sold out as well.

The company encourages parents to bring children, and attracts a very diverse crowd by interspersing nostalgia acts, like the Beach Boys this year, world music and jazz, into the line up of pop rock and hard rock groups. –by CelebrityAccess Staff Writers