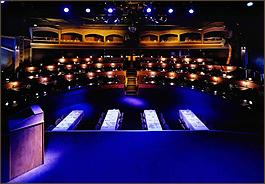 SANTA ANA (CelebrityAccess MediaWire) — The 550 seat Galaxy Theatre in Santa Ana is closing after losing its lease at the end of February to make way for a new nightclub to be called RevolveR.

In its 13 year history, the club has been a staple of the local music scene, playing host to the Orange County Music Awards and providing a performance space for a diverse array of artists from Lucinda Williams to The Misfits.

"The landlord got other offers and we could not compete with those," Folgner told the OC Register "We pay about $18,000 a month in rent and the offers he got were $50,000 a month, so there's no way we could possibly compete with that."

Several upcoming dates after February have been canceled and others have been moved to Folgner's other club, The Coach House in San Juan Capistrano.

The L.A. Times is reporting that the new leasees of the space will be the restaurant/nightclub management firm the Mor Project, headed up by Anton Posniak. The Mor Project is also working on a few other venues in California, including the Rustic Vine in the Irving Spectrum and the Irezumi Sushi Lounge.

A spokesman for the Mor Project told the Times that the new club will be a 25,000-square-foot space, catering to upscale clubbers with multiple rooms, outdoor areas and eight full-service bars. They also plan to revamp the floorplan of the club every 8 months in order to keep their offerings fresh. Mor expects that the new club will be open for business on June 1st. – CelebrityAccess Staff Writers