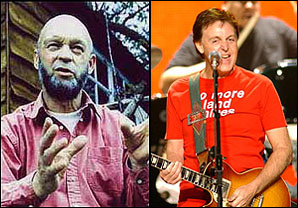 (VIP News) — Glastonbury organiser Michael Eavis says he had to turn down an offer from Sir Paul McCartney to headline the festival.

But he said he had to refuse as the line-up, with Radiohead in the headline slot, had already been confirmed.

McCartney's official spokesman said early plans to play the festival had to be shelved when it did not tie in with his tour schedule.

And a Glastonbury spokeswoman said it was hoped Sir Paul could appear at next year's event instead.

Michael Eavis said: "We tried to work it out with Paul – I offered him the headline on Friday and Sunday but it was Saturday or nothing.

"I told him Radiohead were already booked but it was no good, so I had to say no to him."

But the festival spokeswoman said: "We were in discussions with Paul McCartney, but it never got to a point where we were talking about slot times.

"He may play at the festival next year though."

Sir Paul's spokesman Jeff Baker said: "There was some talk about playing Glastonbury very early on, but it did not fit into the tour.

"Paul has been on the road for 14 months, and the tour finished two weeks ago."