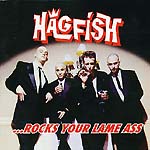 For many, the name Hagfish may not ring many bells, but for those
that have been initiated, it brings to mind powerful pop-punk tunes that
could rival Sum 41, Blink-182 and Good Charlotte. Hagfish released Buick
Men, their first length album, in 1993 through Dragon Street Records. Many
of the songs would be re-released later on London Records "…Rocks Your
Lame Ass!" to an audience eagerly awaiting more. The audience was appeased
with "Stamp," the single from the album. The popularity of the song, and of
the authoring band spread. They toured relentlessly with a virtual
cornucopia of punk rock's top acts. The list of bands that Hagfish has
played with reads like a venerable who's who in punk rock; ALL, Save
Ferris, Mike Watt, The Offspring, Zeke, Gas Huffer, Face to Face,Snuff,
Mighty Mighty Bosstones, NoFX, Reverend Horton Heat, Supersuckers,
Swingin' Utters, Bad Brains, and many more. One of Hagfish's final tours
were as direct support to Everclear on the "Sparkle and Fade" tour.

Many fans were heartbroken when, in 1998, Hagfish decided to hang-up
the towel. Five long years later and the band is ready to pick up the
towel, dust off the drum-set, tune up their guitars and play. Hagfish will
be announcing their reunion and return to performance at The Gypsy Tea Room
on April 18th. The decision to tour again came after playing a Christmas
day show in Dallas in 2002. "It felt great to be in front of the fans
again," claims George Reagan, singer for Hagfish, "it made me remember why we
started doing this more than ten years ago. The reaction to the old songs, fans
just singing along, it was like we never even left."

To kick off their return, Hagfish will be supporting Lagwagon on 8
West Coast dates. Additionally, they will be playing the Stockage Festival
(June 27 – 29) at The Starlight in Fort Collins, CO, with All, Descendants,
Armstrong and more. They will also be recording new material, and hope to
release a new album in the new future.