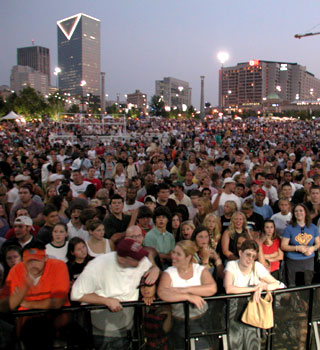 Vanilla Coke's On the Bricks also announced that Shaggy, Arrested Development, Jason Mraz and Jennifer Love Hewitt will kick the series off on the 30th with Hootie & The Blowfish to follow on August 8th and George Clinton & Parliament Funkadelic on August 15th.

The weekly summer music tradition will launch the implementation of a $3.00 ticket charge for all patrons to attend this season. In a move to cover the growth of the event, Cardwell explained that it was no longer feasible for any of her events to be free due to an economic slowdown. The $3.00 ticket will help cover increased costs of the ever-popular event. All of Mad Booking's weekly series which include Coca-Cola's Dancin' In The District in Nashville and Memphis Jam in Memphis, TN will have a $3.00 ticket this season.

Cardwell explained to CelebrityAccess "We had a tremendous amount of growth with all our series last year, so much so that we needed to take a look at the big picture and figure out what steps we could make to support that growth." "Increasing the level of talent was one aspect that we wanted to work on."

Vanilla Coke's On the Bricks will kick off its 3rd season Friday, May 30th and continue through Friday, August 22nd no show on July 4th. Tickets will be available for each show for $3.00 or 12 tickets for $25.00 – Children 5 and under are free; gates will open weekly at 5:30 with music from 6-11pm. Tickets for Vanilla Coke's On the Bricks are not dated and will be good for any show.

Vanilla Coke's On the Bricks is a Mad Booking event.