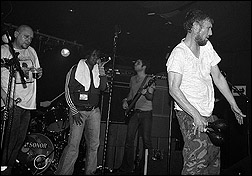 NEW YORK (CelebrityAccess MediaWire) — The legendary Manchester group Happy Mondays were forced to cancel a date at the In the City conference after they ran into visa problems with US customs officials. It was to be the band's first show in the Big Apple in ten years.

Its not the first time this year that the band has run into visa problems. They were forced to appear at this year's Coachella festival without group member Mark "Bez" Berry after his application for a visa was denied by US authorities.

A spokeswoman for the band stated: "It seems that post-9/11 visa application restrictions for a band with the Happy Mondays' history – known as much for their legendary lifestyle as their unique collision of rave beats, indie rock and street poetry – has proven difficult this time.

The group has been on a successful tour of the UK since Coachella however and reportedly have a new album in the works, "Unkle Dysfunktional", which is set to drop on July 2nd.