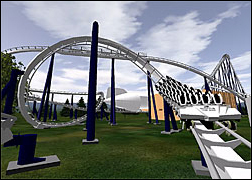 “We’ve partnered with the most iconic hard rock band of all time to create a truly unique and exciting experience that will serve as one of our signature attractions,” Steven Goodwin, CEO of Hard Rock Park said in a statement.

The rollercoaster will feature a high fidelity on-board audio system that blasts Zeppelin’s “Whole Lotta Love” while in motion, creating an unprecedented sensory experience for riders.

Ride designers Bolliger & Mabillard of Switzerland worked closely with Jimmy Page, Robert Plant and John Paul Jones on all aspects of the coaster, including the ride’s name, logo and overall look and feel of the vehicles.

“Our relationship with Led Zeppelin is just one strong example of the support and authenticity Hard Rock Park is receiving from the rock community,” said Goodwin.

The rollercoaster starts with a straight drop into a vertical loop, followed by a double inversion cobra roll, zero-G roll, vertical loop and a corkscrew. Three helixes are also mixed into the second half of the ride, according to UltimateRollerCoaster.com.

The world’s first rock’n’roll theme park is currently under construction on 140 acres near Myrtle Beach, and is slated to open in May 2008. –by CelebrityAccess Staff Writers