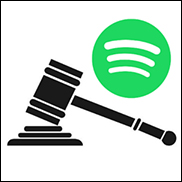 (Hypebot) – Lawsuits are flying over Spotify's alleged use of 10-25% of its song catalog without obtaining needed licences. While the court is expected to rule in the next 2 weeks on class action status and consolidation of at least two of the top legal actions, The Harry Fox Agency, who was responsible for obtaining Spotify's song licences, appears to be scrambling to comply with the law.

By Mike Masnick of Techdirt


A couple of months ago, I wrote a long post trying to dig into the details of David Lowery's class action lawsuit against Spotify. In the end, while there was some question over whether or not streaming music services really need to get compulsory mechanical licenses for producing reproductions of songs, it seemed like the fact that such licenses are compulsory and can be obtained easily via having the Harry Fox Agency issue a "Notice of Intention" under Section 115, it seemed crazy to think that the various music services had not done that. In fact, we noted that the only way the lawsuits made any sense was if the various music services and HFA ignored this and didn't send out such NOIs. At the time, I noted that this would be a surprise, and it could mean the services were in deep trouble.


Or perhaps not a surprise… and, yes, some folks may be in deep trouble. Beyond Lowery's lawsuit, a few other similar lawsuits have been filed. Earlier this month, Tim Geigner wrote about a very similar lawsuit filed by Yesh Music against Tidal. Of course, what didn't get as much attention is that Yesh filed very similar lawsuits against a bunch of other music services as well, including Google Music, Slacker, Line Corporation (which runs Mix Radio) and Guerva (which I think is a misspelling of the music site Guvera). Yesh also sued Deezer a few months ago.


One of the key questions that came up following the reporting on all of these cases is the Harry Fox Agency's role in all of this. HFA, an organization that was set up by the publishers themselves is supposed to be responsible for managing compulsory licensing for the vast majority (though not all) of popular songwriters (remember, HFA is about compositions/publishing, not sound recordings). But it's beginning to look seriously like HFA just fell asleep on the job and didn't bother to do the one key thing it was supposed to do for all these music services: file Section 115 NOIs.


Both David Lowery and another songwriter, Ari Herstand, have recently posted examples of HFA suddenly sending them NOIs that appear to be rushed and are showing up way after they're supposed to. I rarely agree with Lowery about anything, but it's seriously looking like HFA totally fucked up here. Big time. Here's the notice Lowery received:

As Lowery notes, this NOI was sent on February 16th, 2016, but was signed by a Spotify exec who left the company in 2015, for a song that showed up on Spotify in 2011 and using an HFA address that didn't exist until 2012. Basically… it looks like HFA is rushing around trying to send out NOIs that it failed to do properly, and doing a pretty half-assed job about it. And that seems especially stupid when it comes to issuing those NOIs to the guy who is already suing over those missing NOIs.


Herstand just received a similarly late NOI from HFA for his music appearing on Apple Music. As he notes, his notice says the music should appear on Apple Music as of March 10th of 2016, but it's actually been there since Apple Music launched last summer. He also notes this is the first NOI he's ever received from HFA, while he has received plenty of NOIs from the much smaller HFA competitor Music Reports "on a regular basis."


So, given all that, it sure looks like HFA didn't do the one thing that it was supposed to be doing all along, and that's… going to be bad news for someone. The big question is who? All of the lawsuits have been against the various music services, but without being privy to the contracts between HFA and the music services themselves, I'd be shocked if they didn't include some sort of indemnity clauses, basically saying that if music isn't licensed because of HFA's own failures to do its job that any liability falls back on HFA.


And, if that's the case, HFA could be on the hook for a ton of copyright infringement. If it's true that it's basically been ignoring the fairly simple NOI process for a lot of artists, then that's going to be a major scandal — but one that seems a lot harder to pin on the music services themselves. They went to HFA and hired the company to handle mechanical licenses. There may be more going on behind the scenes here, but at a first pass, based on what appears to be happening, HFA may be in some seriously deep trouble.