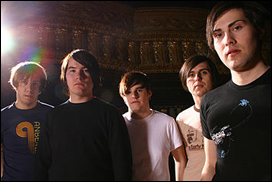 According to Billboard, the lawsuit, filed on Oct. 16th, assets that the Wild Justice Records had entered into a verbal management deal with the band, entitling Wild Justice to an 18% cut of the band's rake.

The suit claims that Wild Justice had prepared a written contract to this end and although it was never signed by the band, they never materially objected to any of the provisions of said contract and operated under the terms of the agreement until May 2007 when it was "improperly terminated."

As a consequence, Wild Justice is seeking $138,000 in damages, including revenue from concerts and merch as well as a Mountain Dew sponsorship deal along with other expenses.

The band has a full docket – a previous legal scuffle with their former label, Victory Records over similar breeches along with counter-suits by the band against Victory for breach of contract are still ongoing. – CelebrityAccess Staff Writers