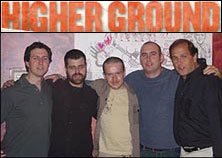 SOUTH BURLINGTON, VT (CelebrityAccess MediaWire) — The popular nightclub Higher Ground will celebrate its grand opening at its new location with a performance by Hot Tuna on December 2.

The club was forced to shut down in April after hosting shows for six years in Winooski. “We’re very excited about our move to South Burlington and now look at our forced closure in Winooski as an unexpected opportunity to grow. We’ve literally gutted the old Showcase Cinema, leaving just the outside four walls and designed the nightclub and music hall from the ground up creating one of the best concert halls in New England. We wanted the ability to have two functional spaces, one of which will be very large, but still not lose the intimacy that our patrons came to expect and love at the old Higher Ground,” said Kevin Statesir, General Manager of the venue.

The larger of the two spaces, called the Ballroom, is almost twice the size of the old Higher Ground and will be reserved for nationally touring acts that draw larger crowds. The Showcase Lounge is smaller and will be available for functions as well as a variety of entertainment from DJs to local bands to private parties. The new locale also offers clear stage viewing, a fully catered kitchen, three bars, VIP lounges, a full box office and a coat check.

Alex Crothers, who along with Statesir was partner at the old venue, will be the Talent Buyer for the new Higher Ground. Several old staff members have been promoted to management including Andy Foescel then new House Manager, Sean Richardson Bar Manager, and Nick Mavodones Box Office Manager. New to the Higher Ground team are Lee Seelig, formerly of GO TIME Music, who will be the venue's Promotions Manager and Production Manager Wade Wilby, a Full Sail graduate.

Tickets for Higher Ground shows can be purchased online at www.highergroundmusic.com or by calling 888-512-SHOW (M-S 10-6pm). –by CelebrityAccess Staff Writers