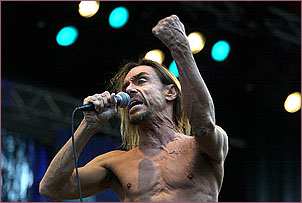 Iggy Pop and the Stooges are reuniting for the first time in 28 years when they perform at the fourth annual Coachella Valley Music and Arts Festival April 27 in Indio, CA. Pop, who performed at Coachella in 2001, will take the main stage with original Stooges, guitarist Ron Asheton and drummer Scott Asheton. Special guest Mike Watt will fill in on bass for David Alexander, who passed away in 1975.

This performance by Iggy and the Stooges comes amid anticipation of four newly recorded songs by the group which will appear on the upcoming Iggy Pop CD to be released by Virgin Records this summer. The CD will also feature tracks by Iggy solo, his band The Trolls and San Francisco’s Green Day.

The Coachella Valley Music and Arts Festival is a two day event April 26-27.