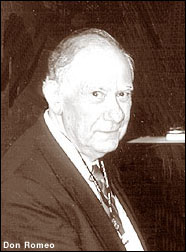 Dominic "Don" Romeo, IEBA Chairman of the Board and a longtime entertainment booker at county fairs throughout the Midwest, died in his sleep from liver and kidney failure at his home in Omaha, Neb. June 23. His family was with him.

Funeral services will be held June 27.

Romeo was the owner and the president of the Don Romeo Agency from 1954 to 1989, when he sold the company to his son, Bob. The company later became a part of TBA Entertainment.

"Don Romeo brought entertainment and smiles to millions of people over his lifetime," said Steve Tolman, president, International Entertainment Buyers Association (IEBA). "He put food on many entertainers tables. Don was a kind and gentle man who cared about family, people and our industry. As Chairman of the Board of IEBA, he was our leader and our conscience. Our thoughts, prayers, and love go out to his wife and family as we will miss him dearly and never forget him."