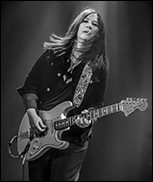 (Hypebot) – Here long time performing and recording artist Kathy Valentine shares with us the specifications on the equipment she uses, as well as the software, and offers us a sneak peak at what a dream setup would look like.

Who are you, and what do you do?

I’m Kathy Valentine. I’ve been playing in bands for 42 years now. Some, like the Go-Go’s, were hugely successful and even made music history. Others, like the Bluebonnets, who I play with now, are an indie, DIY, get it done and have some fun band. We finance our own recordings and even short tours by saving up gig money. I’ve also started releasing solo singles this year, and at the end of the year will tally up all the payments from different online sources and donate the money to charity. It’s already up to $600!

What hardware do you use?

I have 3 go-to amps – a 60’s Vibroverb 1×15, an old Vox AC30 2×12, and a mid 80’s tweed Bassman 4×10. I choose my gig amp depending on which seems right for the room. The Bassman needs to be cranked to sound it’s best. The Vox can hit a good tone around 6, and the Vibroverb can work for smaller gigs. I have a couple others, an old Super Reverb, and some small ones around the house. When I home studio record I use a tiny Gibson Skylark, because I can put it different places and mic it up easy, and it sounds like Plexi Marshalls on the recording.

Whichever amp I use, I take a small pedal board with an ancient TubeScreamer, I call it loud velvet, it’s so smooth and insanely great sounding. I generally use it for solos, but some songs I’ll step on it for a beefier chorus and compensate by turning down guitar. I also use a Cry Baby WahWah, a Boss Tuner, and on 2 songs I just added a Belle Epoch EP3 Tape Echo by Catalinbread. I have no idea how to use it, I just turn knobs until it sounds cool. And for my first electric solo gig this month, I’ve been messing around with a TC Electronic Ditto X2 Looper pedal, seeing if I might want to incorporate that into my deal when I play like that. It’s making me to approach my songs in new ways, which I like.

I use one of 2 Stratocasters, my original guitar, a 1963, or a Custom shop 70’s re-issue. I have about 10 other guitars, but they are gifts, sentimental, or too cool for this or that reason to get rid of. I don’t want to play them live, only the Strats. When I get a bass playing gig, which is rare, I have a White P bass with a jazz neck. The only bass rig I have anymore is a blue sparkle Kustom 200 2×15, plus 100w head.

The only software I use is recording. I run Pro-Tools 10.3.8 on a Mac with Mavericks OS. It’s not supposed to be compatible but everything is working so I avoid updates like the plague. Lost some plug-ins along the way that I kind of miss. I can’t get them back without upgrading. Not going to happen. For the PT I use a Waves bundle, and SpectraSonics Stylus RMX Groove Module. It has zillions of scary beats that I grab randomly then bastardize. I also combine beats with Vinylistics drum loops that I have in a desktop folder, they are just noisy real drums lifted off records. I love them.

What would be your dream setup?

Gosh I don’t know. I borrowed an amp from a guy at a show and loved it, but now I can’t remember the name of it. Bogner? Maybe that’s it. And at SXSW, one of the backlines had a little Supro that I obsessed on for months, but never went and got one. My dream set up would be a major tour with big bucks and endorsements.