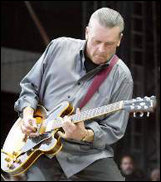 GROTON, Mass. (CelebrityAccess) — John Warren "J." Geils Jr., the guitarist best known as the front man for the J. Geils Band, was found dead at his home in Groton, Mass. He was 71.

According to local ABC affiliate WCBV, Police discovered an unresponsive Geils at his home after being called to the residence for a well-being check. He was pronounced dead at the scene and investigators do not suspect foul play.

The band released numerous albums, slowly transitioning from a blues and soul sound to more traditional rock, scoring early modest hits with albums such as 1973's Bloodshot and 1980's Love Stinks but it wasn't until they'd fully embraced their rock sound that they scored major commercial success behind their breakthrough 1980 album Freeze Frame, which included the #1 single Centerfold.

Despite the success of Freeze Frame, the band's followup albums didn't find as much traction with fans and after creative differences, the group parted ways in 1985.

Following the breakup of the group, Geils changed his focus to cars, restoring sports cars and operating a performance shop Massachusetts, but reunited for a number of performances, including opening with an hour-long set for Bon Jovi's 2013 tour.

As well, Geils released several side and solo projects, including several jazz and blues albums.

"Thinking of all the times we kicked it high and rocked down the house! R.I.P Jay Geils," his former bandmate Peter Wolf wrote in a short message on Facebook following the news of Geil's death. – Staff Writers