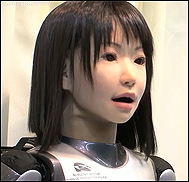 According to technology blog Popsci, the robot, an HRP-4, was developed using breath-analysis software and mouth movement observation based on human models. The divabot reportedly blinks and opens her mouth appropriately as she sings, allegedly mimicking the patterns of a human singer.

The singing is not a track recording, but instead actual singing using a technique called 'robotic shaped note singing,' managed by Vocaloid software developed my Yamaha.

"We hope the entertainment industry will be able to make widespread use of robots," said Masataka Goto, who leads the Institute of Advanced Industrial Science and Technology's media interaction group. – Ian Courtney