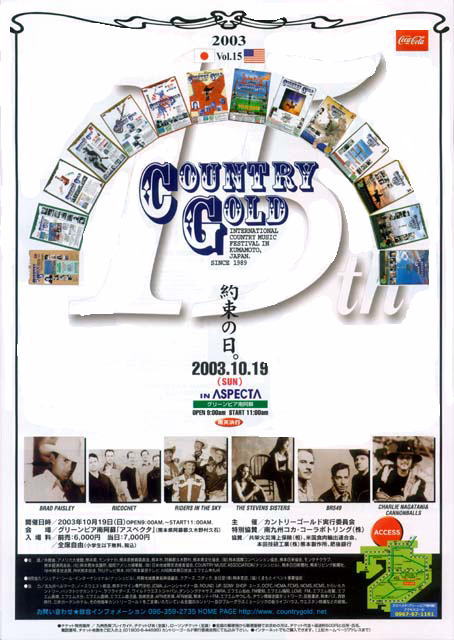 (CelebrityAccess News Service) – “Country Gold Festival,” the only country music festival held in
Japan, is celebrating its 15th Anniversary at Aspecta in
Kumamoto, Japan on October 19 and will feature
Brad Paisley, BR549, Riders In The Sky, Ricochet and The Stevens Sisters.
The festival will be produced by Judy Seale International, a top
international country music promotion and artist management company in
Nashville, and Japanese country music promoter and entertainer Charlie
Nagatani.

Traditionally Nagatani has never booked a repeat performance by

the same act twice but during this special anniversary show, he is bringing
back Paisley who appeared in 2000, BR549 in 1996, and Riders
In The Sky in 1995. Ricochet and The
Stevens Sisters will both be making their first visits to the festival.
Nagatani, who is Japan’s “Ambassador Of Country Music,” will host the event
and open the show with his band, The Cannonballs.

The "Country Gold Festival" is the only event of its kind in Japan and is
set at the base of scenic Mount Aso, which is an active volcano. The
concert is held at Aspecta, the world’s largest outdoor venue. The one-day
event has been a success since its inception in 1989, when it drew an
audience of 8,000, and has grown in attendance each year with more than
30,000 enthusiastic country music fans attending in 1999.

Since 1989 more than 75 top name acts from the United States have graced
the stage in Kumamoto, and Nagatani says he judges the success of the event
on how well the artists enjoy their visit to Japan. The hospitality and
kindness extended by Nagatani and his staff is such that artists have always
asked to return. The fact Nagatani has never made a profit on the show is
indicative of his love and respect for country music and the American
artists.

"It's amazing the places that music has already taken me," Paisley states. "I
look forward to returning for many reasons, especially the opportunity to
hang out with Charlie Nagatani a man who is not shy about displaying his
love of country music. We have become great friends."

Nagatani and Seale have both been honored with numerous awards for their
work in promoting country music. Seale was presented the Country Music
Association’s Jo Walker-Meador International Achievement Award and Nagatani
has received the CMA’s International Talent Buyer / Promoter Of The Year
award. In 2000, Nagatani was the Japanese recipient of the Mansfield Award,
which recognizes outstanding American and Japanese citizens who have
contributed their efforts in promoting a better understanding of cultural
and economic issues between the people of the U.S. and Japan. The award,
established in 1985, bears the name of Mike Mansfield, former U.S. Senator
and longtime Ambassador to Japan. In 2000, the State of Tennessee honored
Nagatani with a resolution outlining his 45 years of achievements and
contributions to country music.

Two major sponsors for the event include the Kumamoto Prefectural
Government and Northwest Airlines, which is the host airline for
Country Gold. –edited by Jane Cohen and Bob Grossweiner