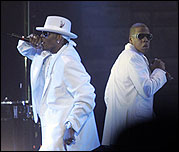 (CelebrityAccess MediaWire) — The Best of Both Worlds Tour featuring Jay-Z and R. Kelly ended when a member of Jay-Z’s crew allegedly sprayed R. Kelly with pepper spray, prompting R. Kelly to leave the tour and file a $75 million lawsuit against the rapper.

Edward Hayes, R. Kelly’s lawyer, told the Miami Herald that the Best of Both Worlds Tour was intended to be “the perfect marriage of hip-hop and R&B,” but as P. Diddy said at the Madison Square Garden show – the first performance after R. Kelly left the tour – “We don’t need R&B tonight. We’ve got hip hop.”

According to Jay-Z’s website, he will continue to tour with special guests P. Diddy and Mary J. Blige. Ticket holders who were primarily interested in seeing R. Kelley will be able to return their tickets for a full refund. –by CelebrityAccess Staff Writers