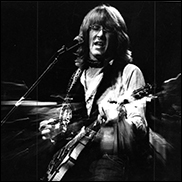 
One of the founding members of the San Francisco band, with lead vocals being shared by Grace Slick and Marty Balin, Kantner was a frontman in his own right and the group developed a large San Francisco following,


Bill Graham saw the band and it’s strong following and booked them as the very first headliner for the famed Fillmore Auditorium.


Famed tunes such as Volunteers and (don’t you want) Somebody To Love pushed that psychedelic sound. The band was even known to throw LSD from the stage to ‘enhance’ the show for fans.


Kantner left college to follow the music already putting him in the local sound circuit.

They formed in 1965 when folk artist Balin decided to create a rock group in response to the Beatles-led British Invasion.
Balin wrote on Facebook after learning his death, "So many memories rushing through my mind now. So many moments that he and I opened new worlds. He was the first guy I picked for the band and he was the first guy who taught me how to roll a joint. And although I know he liked to play the devil's advocate, I am sure he has earned his wings now". Sai Ram "Go with God"

Jefferson Airplane formed in 1965 and signed with RCA Records for $25,000, which was a financial score in the sixties. The band earned five gold albums in the US, including 1967's Surrealistic Pillow and 1968's Crown of Creation in their first run of success.


Their early hit “White Rabbit,” combined the story of Alice In Wonderland with a drug trip; but later songs adopted the political stance of the hippie movement, with 1969’s "We Can Be Together" declaring: "We are obscene, lawless, hideous, dangerous, dirty, violent and young… but we should be together". According to Billboard


The band lived the crazy rock band lifestyle and all that comes with it in a house near Haight-Ashbury.


The group began to fragment soon after, with Kantner releasing a well-received solo album, Blows Against the Empire, and other members forming the blues-rock band Hot Tuna, according to Billboard,
Kantner, Balin and Slick, his then wife, formed Jefferson Starship in 1974.


The guitarist left in 1984, saying "the band became more mundane and not quite as challenging and not quite as much of a thing to be proud". He then took legal action against the remaining members, forcing them to truncate their name to Starship.
That incarnation of the group later had two global hit singles with Nothing's Gonna Stop Us Now and We Built This City; while Kantner reformed and toured with various versions of Airplane, Starship and his own KBC band in the 1990s and 2000s.
"Our condolences go out to the friends, family and fans of Paul Kantner of Jefferson Airplane on the news of his passing," the remaing Doors wrote on their Facebook page.


Adding "Music would not be the same without the sounds of The Doors and Jefferson Airplane, which both contributed so heavily to the signature sound of the sixties and seventies."


Funeral arrangements will be announced at a later date


A statement added by Kal Rudman


"Paul Kantner’s contribution as a songwriter and electric guitarist were instrumental in making the Jefferson Airplane and Jefferson Starship major hit machines for half a century. In every incarnation, Kantner was the glue and the constant. His death leaves a great void among the pillars of the revolutionary San Francisco rock scene and thus, rock in general.


On behalf of the staff of the Friday Morning Quarterback, we send our deep condolences to the Kantner’s immediate and entire music family.”