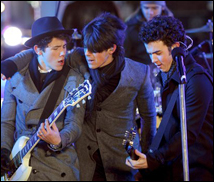 LOS ANGELES (CelebrityAccess MediaWire) — Live Nation has announced that multi-platinum-selling recording artists the Jonas Brothers will be hitting the road for a three continent summer concert tour with special guest and Hollywood Records label mate, Demi Lovato. Both The Jonas boys and Lovato will be performing from their own catalog of hits as well as music from the Disney Channel original movie "Camp Rock" and it's yet-to-be-released sequal.

The tour will be supported by the release of the sequal to "Camp Rock" and cast members from both of the "Camp Rock" movies will make guest appearances during the tour. Disney is also prepping a "Camp Rock" iPhone app to let them buy concert tickets starting on May 15th.

Produced by Live Nation and sponsored by OfficeMax, the tour kicks off Tuesday, July 27 in Dallas, Texas, and will continue throughout North America, Latin America and Europe throughout the Summer and Fall.

The Jonas Brothers have had three #1 albums since their breakout year in 2007 and have evolved into a touring powerhouse. Their "Jonas Brothers World Tour" was among the top grossing concert tours in 2009, with over 1.5 million attendees and sold out shows on three continents. It also won Billboard's Eventful Fans' Choice Award for the best concert tour of the year.

Demi Lovato, star of the hit series "Sonny With A Chance" and a popular solo recording artist, proved her diversity as a musician and performer during her headlining concert tour last year. Her first solo album, "Don't Forget," debuted at #2 on the Billboard 200 and her second album, "Here We Go Again" entered the chart at #1, delivering a platinum-certified hit of the same name. She is a multiple Teen Choice Award winner.