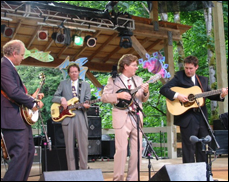 According to show co-producer Cindy Baucom, "Kathy Mattea and Hot Rize are a perfect fit as our hosts. With their long musical history, the chemistry between them gives us the elements for a fun show."

The members of Hot Rize have a long association with IBMA. In fact, they took home the Entertainer of the Year trophy at the very first International Bluegrass Music Awards in 1990. Pete "Dr. Banjo" Wernick served as president of IBMA from 1986-2001. Tim O'Brien, who followed as president from 2001-2004, was also named Male Vocalist of the Year in 1993 and 2006. Bryan Sutton received the IBMA award for Guitar Player of the Year in 2000, and then every year from 2003-2006. The entire group, including bass player/ renowned public radio etown host Nick Forster, took top honors for Song of the Year in 1991, for their performance of "Colleen Malone."

Kathy Mattea, the beloved singer of classics like "Eighteen Wheels and A Dozen Roses" and "Where've You Been," says her current album, Coal, with its streamlined acoustic format and focus on coal mining stories from Appalachia, was "a re-education in singing" for her, as she studied legendary female vocalists like Hazel Dickens in preparation for recording. "It's an album that re-shaped the way I think about music, reminding me of why I love it so much in the first place," she said. The album remained on Billboard's Bluegrass Album chart for 26 weeks in 2008-2009, including 2 weeks at #1.

Like Mattea, O'Brien–a Grammy-winning artist in his own right–is originally from West Virginia. They have recorded together a number of times over the years, and Tim went on the road with Kathy's band in 1990, the same year their duet, "The Battle Hymn of Love," peaked at #9 on the Billboard Hot Country Singles & Tracks chart.

Mattea studied voice in school, taking up the guitar in junior high when she discovered folk music. She joined the Pennsboro bluegrass band while she was a student at West Virginia University, but ended up leaving college to move to Nashville. Kathy worked odd jobs and waited tables in Music City while honing her musical skills, and in 1983 she landed a deal with Mercury Records. Her self-titled debut was released in 1984, and the follow-up From My Heart appeared the following year. In 1986 her third album on the Mercury Records label, Walk the Way the Wind Blows (with the title cut written by O'Brien), proved to be her critical and commercial breakthrough.


A string of hits followed, including a cover of Nanci Griffith's "Love at the Five and Dime," "Train of Memories," "Goin' Gone," "Burnin' Old Memories" and the Larry Cordle-penned "Lonesome Standard Time," among others. Kathy won the CMA Award for Single of the Year in 1988 for "Eighteen Wheels and a Dozen Roses" and took home a Grammy for "Where've You Been" in 1990. She was named CMA Female Vocalist of the Year in 1989 and 1990.


Hot Rize, one of the most uniquely entertaining and influential contemporary bands in the history of bluegrass, was formed in Colorado in 1978 and named after the secret ingredient of Martha White Self-Rising Flour–the product Flatt & Scruggs promoted early in the '50s and '60s. The original band included Tim O'Brien, Pete Wernick and Charles Sawtelle. Mike Scap, the group's first guitarist, departed after three months and was replaced by Nick Forster on bass, with Sawtelle switching from bass to guitar.

The group recorded a series of critically acclaimed albums from 1979-2002, and they appeared frequently on national radio and television programs in the '80s. Performing in nearly every state as well as in Europe, Japan and Australia, their stage show became as popular as their music–which combined soulful bluegrass with their wacky but musically slick alter-ego country swing band, "Red Knuckles and the Trailblazers." Several of their songs went to #1 on Bluegrass Unlimited's National Bluegrass Survey chart–"Walk the Way the Wind Blows," "Colleen Malone" and "Just Like You."

After 12 years of full-time touring and recording, the group disbanded amicably in 1990, but they reunited several times for selected dates and short tours during the 1990s due to popular demand. Sadly, guitarist Charles Sawtelle was diagnosed with leukemia in 1994 and passed away in 1999. The classic group's span with the same four musicians lasted 21 years, and the remaining shows they played in 1999 were dedicated to Sawtelle's memory, with Peter Rowan or Jeff White filling in on guitar. The live album So Long of a Journey was released in 2002, and the band started performing together occasionally with Bryan Sutton, one of Nashville's leading session players, on guitar. –by CelebrityAccess Staff Writers