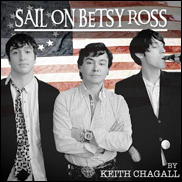 LOS ANGELES (CelebrityAccess MediaWire) — While many consider the approaching 50th anniversary of the assassination of John F. Kennedy on November 22, 2013 to be a remembrance of a dark day in American history, singer singer-songwriter Keith Chagall has taken a different outlook.

Instead of taking part in the pervasive gloom, Chagall has penned a new song "Sail on Betsy Ross," that pays homage to Kennedy's era in a way that Chagall hopes people will find uplifting. In the video for the song, Chagall fuses Beatles-esque pop with images from Kennedy's era to modern times. Video images run the gamut from the fateful Dallas motorcade, to the Atlantic crossing of a Pilgrim ship, to Betsy Ross sewing the American flag, President and Mrs. Kennedy with Caroline and John Jr., to the Washington funeral procession of JFK’s casket, the moon landing and up through the Dream Act Immigration reform this year.

Says Chagall about this first single and title track from his forthcoming album, “It’s a hopeful song that reflects on an iconic president, JFK, who showed us what great things could be accomplished as a nation when we work together.” Adding, “… just as crucial, it shines a light on the spirit and resiliency of great American women like Betsy Ross and Jacqueline Kennedy and up through today’s Diana Nyad, who continuously inspire the rest of us to carry on.”

The song hit the radio this past week the radio as well. Check it out here.