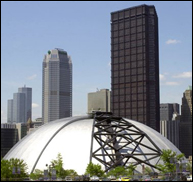 As most artists are looking forward to playing the new arena, the Consol Energy Center – which will be located across the street from the Mellon Arena, facility manager SMG has struggled to find a closing act for the old venue.

There had been a concert by R&B star Maxwell on the schedule for July 10 at the Mellon arena, but the second leg of his tour was canceled.

Says SMG general manager Jay Roberts, "We were working on moving Christina Aguilera to the Mellon [from the First Niagara Pavilion] to be the final event — hometown girl, all that good stuff — and we had it pretty much done and then … she pulled the plug on the whole tour," according to the Pittsburg Post-Gazette.

She also turned down a plea to do a one-off show at Mellon.

By that point, it was "pretty late in the game" to find another major headliner, Mr. Roberts says, and with uncertainty about whether the dome roof is capable of retracting, a special night of local acts was ruled out according to the Pittsburg Post-Gazette.
The folk legends were already scheduled to play the arena. “When we first booked the show, I talked to the agency to see if they could move it later in the summer, because it seemed like it would be a good last show for the arena," said Roberts.

Now with tour cancellations and Paul McCartney booked for the new Consol Energy Center on August 18, King and Taylor will be the last concert at the Mellon Arena. –by CelebrityAccess Staff Writers