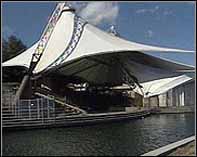 KNOXVILLE, Tenn. (AP) The city of Knoxville is hoping to celebrate the 25th anniversary of the 1982 World's Fair by reopening two of its signature buildings — the Sunsphere and canopy-roofed Tennessee Amphitheater.

The Sunsphere, with its golden globe atop a steel tower visible from Interstate 40, has been vacant and in disrepair for several years while the closed amphitheater was recently saved from demolition.

Mayor Bill Haslam announced plans Tuesday to spend $1 million to renovate the Sunsphere and $850,000 to restore the amphitheater. The city council approved the plans Tuesday night.

Haslam said the goal is to have the structures open by this fall.

"This is the 25th anniversary of the World's Fair opening. We think it's particularly fitting that we announce what we're working on today," Haslam said to start a press conference on a lower level of the Sunsphere overlooking the amphitheater.

The Sunsphere had trouble staying open after the World's Fair ended and was last open for public tours in 1999.

The ball stands 266 feet in the air and contains five floors that included observation levels, a restaurant and kitchen. Restaurant patrons could once peer down through the glass panels as they sat attables.

"We're really wanting to get it open because it should be open; because it's kind of crazy to have the icon of the city not have people able to utilize it," he said. "It makes it a little more special to do it in the 25th year."

The money for both renovations will come from the proceeds of the sale of other buildings at the World's Fair site downtown to a Chattanooga-based developer and a nearby parking lot to another company.

When the Sunsphere is reopened, it will include an observation deck, a food service area and office space. The city owns the structure but has worked out a 20-year lease agreement with the firm Kinsey Probasco Haysof Chattanooga to develop and operate it.

The city council approved a measure in 2004 to spend $1 million to renovate the Sunsphere and asked for proposals to redevelop the buildings at the World's Fair site. No one included plans for the amphitheater in their proposals.

The city accepted an offer from Kinsey Probasco Hays to buy the Candy Factory and Victorian Houses for $1.82 million. The city and developers have been negotiating a lease for the Sunsphere since last year and have worked out one for $57,760 a year that includes utilities and possible inflation changes.

"We had to find a way that worked both for whoever would be operating this, as well as for the city. You had everything from utility cost issues to structural issues that we had to address, and I think any time you're dealing with a public asset it's just a little longer than if it was a private entity," Haslam said.

The money set aside for the Sunsphere in 2004 will now be used to build sidewalks in another part of the city.