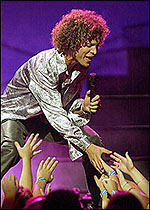 'American Idol,' Guarini has signed with Simon Fuller's 19 Recordings Limited, which will license Guarini's solo effort to RCA in America. "We look forward to working with Justin to nurture his talent and help him build a recording career at RCA," said Bob Jamieson, chairman, RCA Music Group. "Justin already captured the imaginations of millions of 'American Idol' viewers. We're confident he'll do the same with his music."

The 19 Group of Companies was founded by Simon Fuller in 1985 and since then has achieved over 35 No. 1 singles and 13 No. 1 albums. Fuller also has a tally of over 60 Top 40 albums and 170 Top 40 singles in the UK alone. Fuller created and managed the Spice Girls, who became a global phenomenon under his guidance, selling over 38 million albums. In 1998, Fuller's 19 launched S Club 7, which has sold 10 million CDs worldwide, while its three television series to date have consistently topped children's viewing figures, reaching 104 countries. In 2001, Simon Fuller's 19TV created and produced the television phenomenon "Pop Idol." "Pop Idol" launched the singing careers of Will Young and Gareth Gates, both of whom are managed by Fuller and signed to his 19 Recordings record label.

American Idol finalist Tamyra Gray has signed with Simon Fuller's 19 Recordings Limited, which will license Gray's solo effort to RCA in America. "The 'American Idol' finalists are all winners in our eyes," said Bob Jamieson, chairman, RCA Music Group. "Tamyra is a superbly talented singer who holds tremendous promise as a recording artist. We look forward to helping her build a successful recording career."

Atlantic Records and VP Records have entered into a long-term strategic partnership that brings VP's vast resources in contemporary reggae and dancehall music to the major label marketing, promotion, and worldwide distribution of Atlantic. VP Records, established in 1979 as a retail store, is the largest independent label for new Jamaican music in the United States, and holds a predominant position in the influential hip-hop-flavored dancehall niche. This new agreement excludes certain selected territories where VP currently has distribution arrangements in place.

Atlantic immediately assumes responsibility for the international marketing of the upcoming album by Sean Paul, Dutty Rock, scheduled for release on November 12.

"The new Atlantic/VP pipeline brings a much-needed breath of fresh air to hip-hop and R&B, said Atlantic co-president Craig Kallman. "Reggae has been mistaken for an underground phenomenon for much too long, despite Bob Marley's place among the most influential figures in contemporary music
since the 1970s, and even though Jamaican DJ culture spawned American rap. Reggae, and specifically dancehall, have been the most prolific sources of musical advances in R&B, hip-hop, club music, and even pop in the last twenty years."

Kallman added: "This agreement brings to Atlantic a slate of world-class VP reggae artists, including Sean Paul, Lady Saw, Tanto Metro & Devonte, Beres Hammond, Capleton, and T.O.K. It also puts us in the leadership position of catching Jamaica's most innovative sounds as soon as they happen in the studio. I'm so proud that Atlantic's unparalleled heritage in jazz, rhythm and blues, soul, and urban music will now be extended to the most vitally creative force in global popular music today."

VP president Christopher Chin said, "We look forward to a long and successful relationship with Atlantic." VP vice president of Marketing Randy Chin added, "We have every confidence in Atlantic's ability to bring our artists and producers to the international stage from our company's strong creative and commercial base in the community."

Only a few times in music industry history has a label with such a pre-eminent position in a core urban style aligned itself entirely with one major label. The signings of Def Jam Records to Columbia in 1985, and Philadelphia International to CBS in 1972, are on the short list of such instances. "History shows that the success of any kind of urban music through a major label is predicated on the right framework, with creative development remaining in the hands of the producers and artists who address the core audience. Our partnership has all the earmarks of a Def Jam for the new millennium," said Murray Elias, VP's senior director, A&R for Sean Paul, Tanto Metro & Devonte, and Lady Saw.