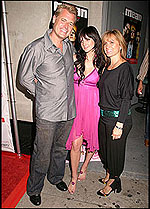 (CelebrityAccess MediaWire) — Geffen Records has inked a joint venture deal with JT Records, founded by Joe Simpson, manager/father of Geffen's Ashlee Simpon and Jessica Simpson. Geffen will handle all marketing, promotion and production for JT Records. JT Records' first signing is the all male quintet Barefoot, which is slated for a 2005 release.

"In bringing in Joe Simpson and JT Records, Geffen Records acquires a real pop sensibility as Joe Simpson understands that world so well," said Geffen President Jordan Schur. "As Geffen has already established a real comfort level with Joe and his staff over the course of the Ashlee Simpson campaign, we have hit the ground running with JT Records first signing: Barefoot. This is a tremendous step for Geffen to bring in Joe and JT Records as it is rare to find a true visionary in the current state of music that matches his ability to find timeless real artists with the work ethic and heart that he insists upon for not only his company but for his artists as well."

Said Joe Simpson, "I feel honored to be part of the Geffen family. We share the same dreams and approach to music and music artists. I feel like I am home."

NEW YORK (AP) — SpongeBob, Dora the Explorer and the Rugrats could all become rock stars in the next few years.

Children's television network Nickelodeon has partnered with BMG to create a record label, which means tunes from shows like "SpongeBob SquarePants" will be released as albums.

"These are characters kids know and songs they sing and love," said Joe DiMuro, executive vice president of BMG Stragetic Marketing. "It's a great way to bring the shows to a new level."

The first album, released Tuesday, is a compilation of songs from the show "Dora the Explorer," about a Spanish-speaking girl and her adventures. A "Rugrats" holiday CD will be out in October.

DiMuro said record executives are also working with the actors who provide the characters' voices to create new songs specifically for CDs which may include other BMG artists.

"Imagine SpongeBob doing a duet with Alicia Keys," DiMuro said. "Sesame Street has shown how much people love this stuff."

The label will also develop budding artists already on the channel, a la Hilary Duff. There are no deals currently, but officials are looking at signing Drake Bell who stars on the show "Drake and Josh."

(CelebrityAccess MediaWire) — Two years ago there was not a single song from a British artist on the Billboard Top 200, a shock considering British artists had found a place on Billboard's charts for the past consecutive 25 years. The decline in success of British artists led Virgin Entertainment Group, the world's premiere entertainment retailer, to join forces with British music authorities to discuss promoting British music in today's diverse and highly competitive American marketplace, at the first London Calling panel.

Over the past year there has been a resurgence in British artists in the U.S. market in music, film, T.V. and even fashion. Recently, musical artists including The Cure, Muse, Joss Stone, The Darkness and Keane have all graced the coveted Billboard Top 200 slots. Similarly, the success of TV programming originated from the UK, including award winning shows such as The Office, Coupling, and the upcoming The Alan Partridge Show, have raised the profile of British television in the U.S. At the box office this fall, the British influence is keenly felt, with a series of high profile movies including, Shaun of the Dead , Wimbledon, the Alfie remake starring Jude Law, and Dear Frankie.

Now Virgin Megastores will explore and debate this resurgence of British entertainment in the U.S. with their annual Best of British campaign and a 2nd London Calling panel. How important the U.S. market is to British entertainers will be part of the roundtable discussion, hosted at the Virgin Megastore on Sunset Boulevard, on October 8 in Los Angeles. During the 45-minute panel discussion, experts from the music, film, fashion and media world will explore the British influence on the U.S. entertainment market. The panel will be moderated by Billboard editor and reporter, Melinda Newman, and followed by a performance, open to the public, by British bands Supergrass and Trash Can Sinatras.

"The US market accounts for 37% of global music sales and it continues to be an increasingly difficult market to break an artist," claims Dave Alder, senior vice president of marketing & strategic development, Virgin Entertainment Group, North America. "At Virgin we keep a close eye on the film, music, TV and fashion in the UK, and we work hard to bring the best of these trends to the U.S., as quickly as we can."

In the past year Virgin Megastores have held in-store promotions and artist appearances with some of the hottest British entertainers in music, film and television including Cornershop, Starsailor, The Stereophonics, Rickey Gervais, from The Office, and The Darkness. In August the Megastores conducted a "No Risk Disc" promotion for Keane's Hopes and Fears CD, where customers could by the CD at a discounted price of $7.99 and return it for a full refund if they were not satisfied. The promotion gave Virgin a 40-percent lift in sales and not a single CD was returned. Virgin believes in-store events and promotions are critical in helping British artists penetrate the U.S. music marketplace.


In the past few weeks Virgin Megastores have hosted Keane and Snow Patrol in-store events. Other British artists scheduled for in-store concerts, include:

"Virgin stands for innovation, fun, and an absolute dedication to customer value," stated Sir Richard Branson, founder of the Virgin Group of companies. "We worked directly with passionate music fans around the world and together we've come up with a digital music service that truly defines the Virgin energy and spirit. It's time for a digital music revolution!"

The Virgin Digital Megastore offers an entire 'Virtual Virgin Megastore' right on a PC, featuring over one million available tracks for just 99¢ each with licenses for playing, burning to CDs and downloading to portable devices. For consumers who prefer a greater level of music-access, the Virgin Digital Music Club is a subscription-based service for $7.99 per month and enables users to have unlimited access to over 100,000 albums of on-demand, CD-quality music to experience any way a music fan can imagine. Radio Free Virgin, one of the most acclaimed online radio services, is completely integrated into the Virgin Digital service, bringing world-class radio entertainment directly to the desktops of the most dedicated music fans.

The new service also features a complete digital music management tool that brings simplicity, flexibility, and power to the desktop. Users can rip and encode CDs, import digital audio from a variety of sources, burn custom CDs, create playlists, transfer to over 50 portable-music devices, and much more. Virgin Digital tames the wild-and-wooly world of digital music and simplifies it all into one elegant, intuitive product.

Virgin Digital has taken the unique "customer first" mentality of the Virgin brand and created the ultimate online/offline customer service experience: 'Ask the Expert,' a customer support and music discovery function available directly on the interface of the product, is like walking into a retail store and asking a highly-knowledgeable salesperson for help. Real-live music and technology experts will answer any questions users may have, finding or recommending music for any music lover, assisting customers in exploring, experiencing and enjoying the world's largest online music catalog, or solving any player-related technical issues. The result is that the Virgin customer benefits from a seamless combination of a great music and a great digital experience. Moreover '3-D browsing', a Virgin Digital exclusive, continues to deliver on that promise by interconnecting and cross linking all relevant content including album credits and artist biographies. This allows customers to easily explore and experience the catalog for themselves in an intuitive, fun and personalized way. No other service allows its customers this kind of music discovery experience.

"We set huge goals with Virgin Digital bringing the excitement and customer-focused experience of a Virgin Megastore directly to the world of digital entertainment. And we nailed it," said Zack Zalon, president of Virgin Digital. "This is the most entertaining, powerful, and intuitive way for dedicated music fans to find, listen, and manage their music collections. It's a true 360-degree world of music."

Virgin Digital will work collaboratively with other Virgin Group companies on cross marketing and promotions in an effort to mutually extend the breadth, depth and knowledge of music available to customers.

Virgin Digital builds upon the music licenses and content distribution platform provided by MusicNet, while leveraging its own unique technological resources for the playback engine, user interface, search, browse, and media-management functions to create the overall Virgin Digital platform and consumer offering. The product is compatible with any portable music device running Microsoft's 'Plays for Sure' software.

While plans are currently in place to extend Virgin Digital outside of the United States, no dates have been announced. –Bob Grossweiner