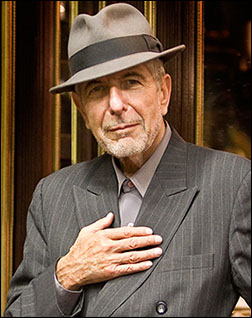 (CelebrityAccess) — Leonard Cohen, the influential singer, and songwriter, widely regarded as the poet laureate of the 1960s and 1970s has died at the age of 82.

His death was confirmed by his record label Sony Music Canada in a post on Cohen's Facebook page:

"It is with profound sorrow we report that legendary poet, songwriter, and artist, Leonard Cohen has passed away," the statement read. "We have lost one of music's most revered and prolific visionaries. A memorial will take place in Los Angeles at a later date. The family requests privacy during their time of grief."

A cause of death was not given, but Cohen had indicated that he was unwell following his most recent tour. In a recent profile in The New Yorker, Cohen discussed his final album, released last month, the recent death of his longtime partner Marianne Ihlen and hinted at his own death.

“Maybe I’ll get a second wind, I don’t know. But I don’t dare attach myself to a spiritual strategy … I am ready to die. I hope it’s not too uncomfortable. That’s about it for me,” Cohen told the magazine.

A native of Westmount, Quebec, Cohen learned guitar and had his first taste of life as a professional musician when he formed a country-folk group called the Buckskin Boys, but soon switched his focus from acoustic to classical guitar after meeting a flamenco guitar teacher.

Cohen attended McGill University in Montreal, where inspired by poets such as Federico García Lorca and William Butler Yeats, he studied poetry and literature, and graduated with a B.A. Following his graduation, he briefly attended law school and held a number of jobs while writing poetry, publishing his first collection Let Us Compare Mythologies in 1956.

Through the 1950s and 1960s, he continued to write and publish, but without much success. With a modest trust fund, he purchased a house on the Greek island of Hydra, where he wrote Flowers for Hitler (1964), and the novels The Favourite Game (1963) and Beautiful Losers (1966). However, despite positive critical reviews, his work found little traction with the reading public.

After returning to the United States in 1967, Cohen released his first album, Songs of Leonard Cohen, which was a minor hit in the U.S., peaking at 82 on the Billboard 200. The album resonated more strongly in Europe and the UK, where it spent more than a year and a half on the charts, peaking at #13.

Cohen followed this up with Songs from a Room (1969), which included his signature hits Bird On A Wire and Songs of Love and Hate (1971) which helped to concretely define the spare sound that he would later come to be known for.

Cohen toured extensively in the 1970s, and experimented with a variety of musical styles, working famously with 'wall-of-sound' producer Phil Spector on Death of a Ladies Man, an album which Rolling Stone called "Leonard Cohen's Doo-Wop Nightmare."

In 1984, he released his seminal Various Positions, which included two cuts "Dance Me to the End of Love" and "Hallelujah" that would go on to become standards in the Cohen songbook. While Hallelujah initially flew under the radar of many, a later recording by John Cale and then Jeff Buckley helped to cement the enduring popularity of the song with Cohen's fans.

Through the 1990s, Cohen continued to release albums, with his music increasingly reflecting a dark view of political and social issues, with songs addressing events such as Tiananmen Square, or the L.A. Riots.

Cohen returned to the stage after a long hiatus in 2008, launching his first world tour in more than 18 years. It had been a difficult period for Cohen, notable for the public and litigious break from his longtime manager Kelley Lynch, who Cohen sued her for financial impropriety that left his finances drained. Following this financial setback, Cohen toured relentlessly, performing more 380 shows from 2008 to 2013 and releasing several albums, including Old Ideas (2012), Popular Problems (2014), and his final release You Want It Darker (2016.)

Over the course of his long career, Cohen received many plaudits and accolades, including inductions into the of the Canadian Music Hall of Fame, the Canadian Songwriters Hall of Fame and the Rock & Roll Hall of Fame. He received a Grammy Lifetime Achievement Award, multiple Juno Awards, and was named as a Companion of the Order of Canada, Canada's second highest civilian honor.

While Cohen had several long-term relations, most notably with Los Angeles artist Suzanne Elrod, with whom he has two children. – Staff Writers