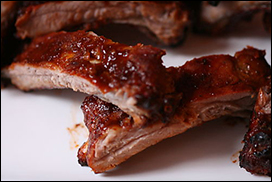 CLEVELAND (CelebrityAccess) — Live Nation's Cleveland office has announced that they are pulling the plug on the 2016 Great American Rib Cook-Off and Music festival, which is usually held on Memorial Day weekend. 2016 would have marked the 25th year of the event.

"It's time to take a breather," Barry Gabel, senior vice-president for marketing and sponsorship for Live Nation told the Cleveland Plain Dealer. "Bottom line, we've done the event for so long we've decided we'll move on, and we'll focus on all the other events and festivals we're staging this year."

Gabel noted that the decision to pull out of the event was in part due to oversaturation of the Cleveland market.

"It seems there's a rib cook-off in every city, every suburb, just about every summer weekend in Northeast Ohio," Grabel told Cleveland Plain Dealer. "We're the only ones that draw the kind of talent, on a national basis, for this kind of event – and we didn't want to slip-slide along.

"It's not an inexpensive event to stage. And it just seemed like the area is saturated." – Staff Writers