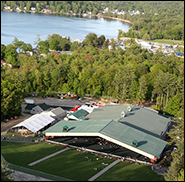 BEVERLY HILLS, Calif., (CelebrityAccess) — Live Nation Entertainment announced that they have taken a stake in the Bank of New Hampshire Pavilion in Gilford, NH.

The executive team currently in place at the Pavilion, led by president Robert “R.J.” Harding and his wife Bridget, will continue to run day-to-day operations and will work with Ticketmaster to integrate its primary ticketing services.

Harding told the New Hampshire Union Leader that the deal had been in the works for more than three years, and that he had bought out the other minority partners at the amphitheater.

“I have more equity now and have to be damn sure I’m successful going forward,” Harding told the newspaper.

“A lot of the financial aspects will shake out down the road as we see how we do,” he added.

Originally opened as Meadowbrook Farm in 1996, and later known as the Meadowbrook Musical Arts Center, the 8,300-capacity amphitheater was named the Bank of New Hampshire Pavilion in 2013.

The new moniker for the shed was as part of a series of upgrades that included the addition of nearly 3,000 covered seats, two new parking lots and a second road into the venue.

“We are thrilled to add the Bank of New Hampshire Pavilion to our venue portfolio, and to welcome R.J., Bridget, and their team to the Live Nation family,” said Don Law, President of Live Nation New England. “The Pavilion is a very unique and special venue, and we look forward to helping grow an already outstanding business to bring the people of New England a world class entertainment lineup for many years to come.”