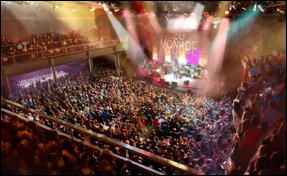 Located located directly across the street from the Van Andel Arena, the newly-built, state-of-the-art concert venue is slated to open in the early part of 2017 with the first concerts for the venue to be announced this fall. The working name for the new venue is 20 Monroe Live.

According to House of Blues, the venue, when completed, will be one of the most versatile in their portfolio, offering a movable stage and various configurations that will allow a full general admission capacity of 2580 with scalable options of 1200, 1600, 2200.

The newly-built, state-of-the-art concert venue is slated to open Early 2017 in downtown Grand Rapids. The working name for the project is 20 Monroe Live with concerts planned to be announced this Fall.

Reserved seating shows will showcase a full capacity of 1700 seated, with scalable options of 500- 1200 capacity dependent upon artist needs.

"The new venue will feature the best sound system of any club its size, unparalleled sightlines, and superb food and beverage, making it one of the most artist and fan-friendly venues in the U.S. It will be a great experience that rivals the best concert halls anywhere in the country," said HoB President Ron Bension.