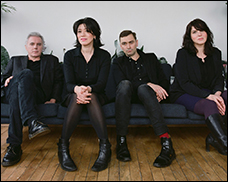 "We are very sad to announce the departure of Phil King from the band. As a result, we will no longer be able to appear at the Iceland Airwaves and Rolling Stone Weekender festivals – massive apologies to everyone who was looking forward to seeing us play there," a statement from the band said.

The added that they were in the process of looking for another bass player and still intended to perform their final show at Manchester Academy on Nov. 25th.

Originally formed in 1987, the group parted company in 1996 after drummer Chris Acland committed suicide. They reformed late last year and have since released an EP of new material.

While the band did not comment on the reason for King's departure, it coincided with the anniversary of Acland's death. In addition to his work with Lush, King has also performed with bands such as The Jesus And Mary Chain, Felt and The Servants. – Staff Writers