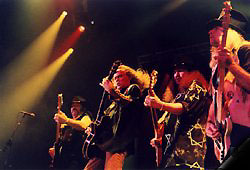 (CelebrityAccess News Service) — Lynyrd Skynyrd has been forced to cancel five concerts on its The “Party of a Lifetime” co-headline tour with Sammy Hagar August 1-6 as founding Lynyrd Skynyrd lead guitarist Gary Rossington has been advised to immediately rest in order to combat medical fatigue.Rossington underwent a successful open heart operation in late February and was given the green light to return to the stage June 13 in Karlsruhe, Germany.

The “Party Of A Lifetime” tour is scheduled to start again next Friday, August 8 at the Cynthia Woods Mitchell Pavilion in Houston, TX. The tour kicked off July 19 and runs through August 17. According to Hagar, "We wish Gary a speedy recovery so we can get back on the road with us and kick some ass."–edited by Bob Grossweiner and Jane Cohen