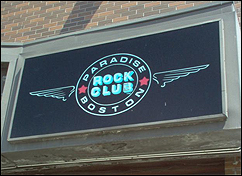 BOSTON (CelebrityAccess MediaWire) — The Boston Globe is reporting that the Paradise Rock Club, one of Boston's most popular music clubs, is being sold to local bar owner Joe Dunne and Live Nation.

No price was disclosed, as the agreement to sell has not been officially revealed.

The Lyons Group owns the Paradise, is selling the Commonwealth Avenue club to Dunne, according to a Boston Licensing Board official, who asked not to be identified because he was not authorized to speak publicly. The Lyons Group, run by entrepreneur Patrick Lyons, operates several entertainment facilities in Boston including the club Avalon, which is now undergoing a major renovation and expansion on Lansdowne Street, across from Fenway Park.

The Globe also reports that Dunne, who is in Ireland and could not be reached to comment, owns Lir, a restaurant and bar on Boylston Street in the Back Bay, and McGann's Pub, a bar and restaurant in the Bulfinch Triangle near North Station that is outfitted like an Irish country pub and sometimes features live music. Dunne also runs The Front Lounge in Dublin.

The Paradise opened in 1977, and its stage has been host to the Police, AC/DC, Blondie, REM, Elvis Costello, Dire Straits, Tom Waits, Coldplay, and dozens of other nationally known groups and performers.

The Paradise holds about 650 people. Boston entertainment impresario Lyons is replacing Avalon and its sister club with a modern club and restaurant complex with sidewalk seating and a terrace looking toward Fenway Park. The club is now closed for the renovations. Lyons said several months ago he planned to spend about $14 million to build a larger club, with a capacity of about 2,500.