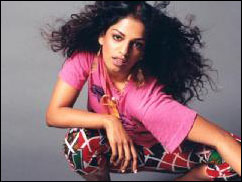 NEW YORK (CelebrityAccess MediaWire) — “I nearly had a seizuh/Trying to get my visah/Just to come and talk to youuu.” So rhymed M.I.A., between songs, as she watched a street full of fans — the crazed and, in greater numbers, the curious — watching her at this summers Siren Music Festival, reported The New York Times.

She lives in London, and she has had to cancel recent concerts in the United States while waiting for her travel documents. Visa troubles had threatened to derail her plans to perform at Siren and the Virgin Festival in Baltimore, but those problems were resolved and the dates happened without a hitch.

The New York Times said this about M.I.A.'s Siren Music Festival performamce, " She played before the New York Dolls, though in some sense she was the day’s big star. A few years ago she became a not-quite-mainstream sensation: a London hipster chanting lyrics full of political slogans and references to her Sri Lankan heritage. Using beats inspired by the dance music of Rio de Janeiro, Kingston, London and (even more exotic) Baltimore, she helped teach American listeners that world music could be as raunchy and as futuristic as anything homegrown.

Rolling Stone added this about her new album titled ‘Kala’: ”With visa madness blockading her new Brooklyn apartment, she turned world traveler, pulling in multiple Indian musics and encompassing Jamaican dance-hall moves, Indian-Trinidadian multicontinental mash-up, Liberian vibes, a British-Nigerian rapper, Australian aboriginal hip-hop, Baltimore hip-hop, Jonathan Richman, the Clash and a bonus afterthought from Timbaland's solo album. Though she claims this record is more personal and less political than Arular, that's misleading. The political was all too personal on an album obsessed with her long-lost father, a player in Sri Lanka's terrorist-revolutionary Tamil Tigers. Here, that conflict-ridden relationship is behind her. Star access enables a woman who grew up an impoverished refugee to observe the outcomes of similar histories in immigrant and minority communities worldwide. If you don't think that's political, ask your mama — or hers, who's named Kala.”