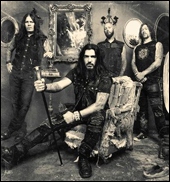 OAKLAND, CA (CelebrityAccess) — California-based metal band Machine Head have announced that they are postponing their planned North American tour, citing a need for more studio time with their upcoming album. However, while the band's American fans get the short shrift, the group's planned European tour set for November is still a go.

The album, "Bloodstone & Diamonds" is the upcoming eighth full-length studio album and is set provisionally for release on Nuclear Blast Records on November 7th, 2014.

In a press release, a spokesperson for the band said:

“It is with great disappointment that Machine Head must announce the postponement of our North American tour this fall. Our new album “Bloodstone & Diamonds” has taken longer to complete than expected and we had to make the difficult choice to either delay the album, let it go out as incomplete, or cancel the tour in order to properly finish and promote the album in the caliber it needs to be done. We decided postponing the tour was the best decision for the record.

We feel this record is a milestone, we have something truly special here, but getting there has been a challenge. Our vocalist / guitarist Robb Flynn just returned from a press tour where he was playing rough mixes and incomplete versions of songs for the press just to try and keep everything on time for our November release date."

The group plans to rescheduled their postponed tour dates for the beginning of the year. – Staff Writers