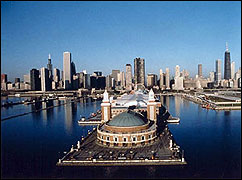 The Metropolitan Pier and Exposition Authority (MPEA) has selected Tim Macy, a veteran of the theme park and family entertainment industry, as the new general manager of Navy Pier in Chicago. Macy's selection, which followed a nationwide search of candidates, was approved by the MPEA Board.

Macy brings more than 25 years of experience to the position, including senior-level positions in two Olympic games. He is currently the president of Woodward/Macy & Associates, an Orlando, Florida based firm which provides consulting and project management for entertainment venues, sports stadiums and retail sites in the U.S. and overseas.

"Tim possesses a wealth of valuable experience which are applicable to virtually all of Navy Pier's major operations, ranging from entertainment, to retail to facility management," said Leticia Peralta Davis, CEO of the MPEA, which owns and operates Navy Pier as well as Chicago's McCormick Place.

"We are extremely pleased to have someone with Tim's professional expertise and accomplishments joining our team and helping us in our ongoing efforts to enhance what we offer the people of Chicago, the state, and visitors from around the world," added Theodore Tetzlaff, chairman of the MPEA Board.

Macy's career has included leadership roles at high-profile international venues. He served as planning team leader for the 2000 Summer Olympic Games held in Sydney, Australia, where his duties included the development of plans for Olympic facilities.

He played a similar role during the 1996 Olympic Games in Atlanta, where he served as general manager of the Centennial Olympic Park. In that capacity, he was responsible for the design, development, build out and operations of the site, which became a central gathering spot for area residents and tourists alike. His earlier career highlights included various positions with the Six Flags Corporation and Universal Studios-Florida.

"In our industry, Navy Pier is widely recognized as one of the most exceptional family-oriented facilities in the entire nation," said Macy. "I am very happy to have been selected by the MPEA Board. I am looking forward to working with this team to help build on Navy Pier's stellar reputation."

Since last summer, Patricia Rios has served as interim general manager of Navy Pier. She will now resume her full-time duties as MPEA chief of staff. For the current fiscal year, the Pier is posting a surplus of nearly $3.5 million, while general and administrative expenditures are being kept low-currently, such spending is $900,000 less than the amounts budgeted. –Jane Cohen and Bob Grossweiner