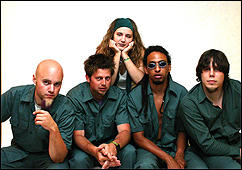 (CelebrityAccess MediaWire) — Officials at the Tower City mall in Cleveland, Ohio, silenced the performance of Afro-beat band Mifuné after only a 20 minute performance, because members of the group were wearing anti-President Bush T-shirts.

The band was performing as part of the Tri-C JazzFest when the sound was suddenly cut off by the mall’s management, because the felt the group’s attire was inappropriate.

“The didn’t like that all the band members wore a T-shirt with a picture of George Bush with a line through it,” band leader Jacob Fader told The Plain Dealer. “They said we either remove the shirts, turn them inside out, or get off the stage. I said that doing so would be against our core principles and free speech. We told the audience what happened from the stage after the microphones were cut. The crowd booed.”

Tower City general manager Lisa Kreiger said the shirts were not suitable for the mall’s atmosphere.

“We felt the band’s attire was distracting and inappropriate,” she told the paper. “We welcome all the musical groups from the festival. The purpose of the show was to provide musical entertainment.”

Fader told the paper that security officers were brought in to keep order among the murmuring crowd that had gathered.

“When my father started to say that it was wrong to silence us, a security cop told him to shut up,” Fader told the paper. “My dad said he had the right to free speech and the security guard said, ‘Not in here you don’t.’”

He said the band was silenced during their song “Supercrush,” which he described to the paper as a “song about how the Bush administration separates the wealth, causing the elimination of the middle class.” –by CelebrityAccess Staff Writers