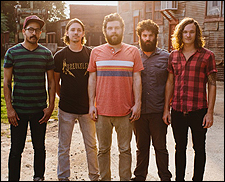 The series, a partnership between Yahoo! and Live Nation, sees a live concert streamed every day of the year.

Manchester Orchestra is currently on the road in support of their latest release "Hope", which they bill as a a re-imagination of COPE, their most recent album, issued earlier this year. The 13-date tour kicked off in October and has just about run its course.

Remaining dates on the tour include