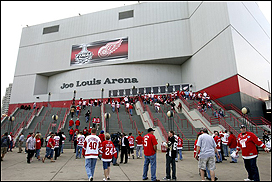 DETROIT (CelebrityAccess MediaWire) — Just days after Detroit declared the largest Municipal bankruptcy in American history, Michigan officials approved issuing up to $450 million in bonds to finance the construction of the new $650-million arena for the Detroit Red Wings.

According to the Detroit Free Press, the State and the Olympia Development, the Ilitch-owned company behind the arena project must now settle on a management agreement that keeps the Red Wings in Detroit for the next 35 years in order for the project to move forward.

The 30-year bond issue would be backed by both private and public funding, including revenue from property taxes, as well as revenue from concessions and parking at the venue.

Approval for the bond issue was unanimous and Michigan Governor Gov. Rick Snyder to lend support for the project. When asked by reporters if a new arena was an appropriate use of money with Detroit facing a severe financial Crisis, Snyder said that the arena would bolster the city's tax base and create an estimated 4,380 new construction jobs.

New jobs and tax base enhancement are very common justification for public financing of sports and entertainment venues, however, apart from studies by paid consultants, the majority of academic research strongly indicates that the economic development argument fails to stand up to scrutiny.

"Few fields of empirical economic research offer virtual unanimity of findings. Yet, independent work on the economic impact of stadiums and arenas has uniformly found that there is no statistically significant positive correlation between sports facility construction and economic development," concluded one influential academic study on the subject. – CelebrityAccess Staff Writers