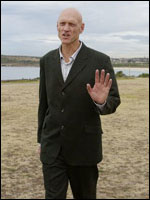 SYDNEY (CelebrityAccess MediaWire) – The Australia Recording Industry Association will induct Midnight Oil to their Hall of Fame on October 29th at the Acer Arena. Midnight Oil are to be recognized for a long career that combined worldwide musical success with strident political activism. Midnight Oil sold more than 12 million copies of their 14 albums worldwide, using their fame to bring global attention to issues such as Aboriginal rights and the plight of impoverished workers.

ARIA Awards committee chairman Ed St John said Midnight Oil "is one of the greatest rock'n'roll bands this country has ever produced". "They were incredibly successful all over the world, but much more importantly, they made music that mattered," he said today. "They covered subjects that had rarely been addressed in a rock song before: land rights, the environment, social justice, war, human rights and Australian history.”The sound of their music, created by five supremely talented singers and musicians, evoked the very essence of Australia."

Midnight Oil’s lead singer, Peter Garrett has turned his attention to politics since the band broke up and has been an Australian Labor Party member of the House of Representatives since 2004. Garrett said “being chosen for the Hall of Fame was a ‘mighty honour’.”

The BEDS ARE BURNING stars will reunite for the first time since their WaveAid performance in January 2005, when they played at the Sydney Cricket Ground to raise funds to help victims of the Asian tsunami in 2004. SILVERCHAIR have confirmed media reports that they will perform at the 2006 ARIA Awards. The Newcastle trio will perform a MIDNIGHT OIL song on the night as part of that legendary band's induction into the ARIA Hall of Fame. SILVERCHAIR have sold over six million albums worldwide and enjoyed more top 40 singles in the last decade than any other Australian band. The group's highly anticipated new album will be released in early 2007, but they have interrupted work on that to prepare for this special ARIA Award's appearance

The band will join THE DIVINYLS, ICEHOUSE, LOBBY LOYDE, DADDY COOL, HELEN REDDY and ROSE TATTOO as the final recipients of this year's award.