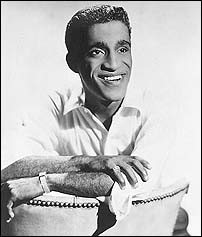 (CelebrityAccess News Service) – In early 2004, the year that marks Sammy Davis Jr.'s 75th anniversary in show business, a new show is opening, entitled "Mr. Bojangles: The Ultimate Entertainer," that will showcase Davis' many talents. The producers are looking for two explosively talented performers to portray Sammy Davis Jr.; performers who can sing, dance, act and do impersonations, all at the same time! The show will open in early 2004 and will tour major casinos across the country.

"The show will focus on Sammy's triumph over his own doubts and fears, and will recreate the once-in-a-lifetime experience of seeing Sammy live," says Gerry Dedera, the show's director. "Casting is a challenge. These are big shoes to fill."

Mike Lewis at Calico Music, who worked with Sammy, will arrange the score.
"It will be the complete Sammy experience, and will tour with a dazzling showcase collection of Sammy's personal artifacts," says Richards.

Davis had a string of recording hits, including "Candy Man," "I've Gotta Be Me," "Mr. Bojangles," and "What Kind of Fool Am I?" Two new biographies of Davis have just been published and a feature film, based on his best-selling autobiography, "Yes I Can," is also in the works. Davis died in 1990. –Jane Cohen and Bob Grossweiner