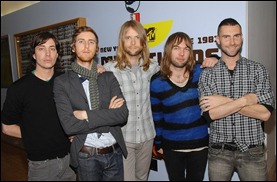 The road show will see A&M/Octone recording artists Maroon 5 playing new single â€œIf I Never See Your Face Againâ€ and recent Grammy-winning lead track â€œMakes Me Wonder,â€ along with a plethora of radio staples and fan favorites from platinum-plus-selling new album â€˜It Wonâ€™t Be Soon Before Longâ€™ and its blockbuster-selling predecessor, â€˜Songs About Jane.â€™ On April 9th, Maroon 5 will perform on the â€œAmerican Idolâ€ charity show, â€œIdol Gives Back,â€ to be followed by an April 13th performance on Comedy Centralâ€™s live event benefiting autism, â€œNight Of Too Many Stars.â€

Fresh off of the release of their new double album â€˜Saturday Nights & Sunday Mornings,â€™ Counting Crows will continue with hits like the top 5 track â€œMr. Jones,â€ â€œHard Candy,â€ â€œRain Kingâ€ and others as well as hot new tracks like â€œYou Canâ€™t Count on Me,â€ â€œWashington Squareâ€ and â€œCowboys.â€ Their new album, produced by Gil Norton & Brian Deck takes the listener on a journey through the frenetic, crazy, whirlwind, partying, famous Saturday Nights, and the redemptive, regretful aftermath of the Sunday Mornings that follow. But Counting Crows is one of those bands you follow for the long haul. For those that first heard them opening for Bob Dylan long ago, or subbing for Van Morrison one memorable night at the Rock and Roll Hall of Fame, much of the soundtrack of our times comes from the Crows — from their singer/songwriter Adam Duritz.

â€œCounting Crows and Maroon 5 on the same stage is an incredible double bill for music fansâ€ said Live Nationâ€™s Senior Vice President of Arena and Amphitheater Programming, Ryan McElrath. â€œBoth bands have a huge body of hit songs that are sure to please fans from coast to coast.â€ The tour, which is expected to make more than 40 stops in all, is being produced by Live Nation and is a continuation of the long term touring deal the company struck with Maroon 5 in 2007 which runs through the summer of this year.
In the nine months since Sara Bareilles released her debut album, â€˜Little Voice,â€™ she has emerged as one of the most exciting breakthrough artists of 2008. Her hit single "Love Song" currently sits at #2 on the Top 40 charts and "Little Voice" has been certified gold.

Augustana are currently planning to release a new album titled "Can't Love, Can't Hurt" on April 29, 2008. The first single from the album is titled "Sweet and Low."
The bands will be working with Reverb, an environmental non-profit, to make the tour green and educate and engage fans to promote environmental sustainability. The environmental efforts on the tour will include using biodiesel in all truck and buses, as well as neutralizing CO2 emissions from venue energy use, hotels, flights, touring vehicles, and fan travel.
In addition, backstage plastic, aluminum, paper and cardboard waste will be reduced and recycled. Theyâ€™ll also be using biodegradable and reusable catering products along with local and organic food. A fan outreach Eco-Village will be set up at each show consisting of local environmental groups, green technologies, and a fan carbon offset program. Reverb will also be creating a dedicated Tour greening website including eco tips and a carpooling program.