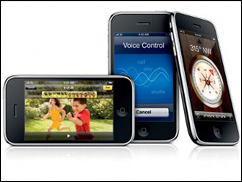 SEATTLE (Hypebot) –
Yesterday's big news was the unveiling of the new iPhone, and along with it came a nice little bonus for those who sometimes market music via video.


Sure it’s great that Apple lowered the price on the basic 8G model to $99 making the cool to own iPhone more affordable for your average starving musician. But the real news is the new iPhone 3G S which, in addition to a storage increase, digital compass, faster connection speeds, and the nifty new iPhone 3.0 operating system, adds a number of new imaging and video features that should have pocket camcorder manufacturers like Flip feeling nervous.

The HD mini-camcorders leave the iPhone in the dust when it comes to resolution. But the new iPhone's editing and sharing features beat anything offered in the current crop of pocket camcorders. And not only can you do basic edits on the iPhone 3G S without a computer, but you can also upload videos to YouTube or MobileMe and share them via e-mail or multi-media text messaging.

Now artists, music journalists and fans can pull out their iPhone 3G S, grab a little concert or backstage footage, edit out the drummer giving his friend the finger and have it up on the web in seconds without a computer or internet connection.