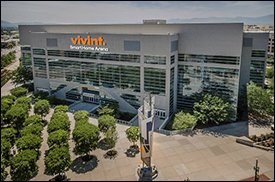 SALT LAKE CITY, Utah (CelebrityAccess) — Larry H. Miller Sports & Entertainment, the company that owns the Salt Lake City arena which serves as a home for the NBA team Utah Jazz, announced a new partnership that will include naming rights for the venue.

The name for the 19,911-seat facility, formerly known as EnergySolutions Arena, will be the Vivint Smart Home Arena. The arena hosts about 1.8 million guests and more than 100 sports and entertainment events each year. The basketball court is named for Larry H. Miller, who spearheaded the construction of the building 25 years ago.

The name change, effective immediately, will be visible throughout the facility, with Vivint Smart Home Arena being prominent on the exterior of the building, the lower panels of the center hung scoreboard, all digital building signage and on the Utah Jazz basketball court. The venue’s naming transition to Vivint Smart Home Arena will occur throughout the end of 2015 as the building hosts marquee events beginning with the Garth Brooks World Tour on Oct. 29-31 and the Jazz home opener on Nov. 4

Vivant provides products and services for the automation, control and monitering of homes via smart devices.

“The Utah Jazz and the arena have been an incredible economic engine for this region, and have created a tremendous sense of pride among Utahns,” said Todd Pedersen, CEO of Vivint. “This agreement extends far beyond a typical ‘logo-on-the-building’ arrangement – it’s a true partnership built around innovation, community impact and the drive to elevate the prominence of Utah.”

The full financial terms of the 10-year agreement were not disclosed. – Staff Writers