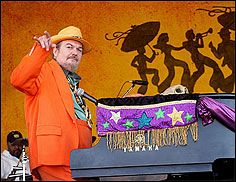 NEW ORLEANS (CelebrityAccess MediaWire) — After losing nearly $900,000 in 2004, the New Orleans Jazz & Heritage Festival got back into its groove this year with the help of its new partner AEG Live.

After suffering sagging attendance and profits since 9/11, longtime Jazzfest organizer Festival Productions Inc. teamed up Los Angeles-based AEG Live, which helped to reinvent the festival with additions of a Latin Day, a new local music and culture stage, and more big-name talent.

Jazzfest also introduced special accommodations and attention for VIPs willing to spend $550 for each weekend, which helped to draw more money into the audience.

Festival producer Quint Davis told the Times-Picayune that this year’s festival had a headcount of somewhere between the 400,000 to 450,000 range, a similar attendance to their totals in the 1990s. No records were broken, however, despite flawless weather on six of the seven days of the festival.

The AEG team was very impressed with the outcome of their new venture.

“I thought it was truly the best music-related event I’ve ever been to in my life,” CEO of AEG Live told the paper. “Now I understand why people plan a year in advance around these weekends.”

Davis and Phillips are considering courting a corporate sponsor to affix its name to the entire Jazzfest, rather than just an individual state, which would bring in millions of dollars. The Jazzfest board has been considering the idea since as long ago at 1997, but it now appears to be solid plan.

“It makes some people very nervous when you talk about (corporate) sponsors, that there’s something sacrilegious about sponsors. But it’s an integral part of the financial architecture,” Davis told the paper.

Last fall, following their less-than-impressive 2004 production, the Jazzfest team faced an uncertain future, as negotiations with AEG and the foundation put them two months behind in booking and contracts. Davis stepped up to the plate with some Southern folk wisdom.

“We didn’t have a contract, we may not have had any money, we were starting two months late to reinvent a festival with a new partner and a new business model,” Davis told the Times-Picayune. “So I told them, ‘Don’t worry about the mule going blind, just load the wagon.’”

Davis printed T-shirts bearing the staff’s new motto that urged them to ignore potential problems and proceed with the task at hand. As it turned out, he said, “The mule pulled the load, blind or not.” –by CelebrityAccess Staff Writers