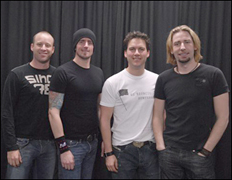 LOS ANGELES, CA (CelebrityAccess MediaWire) — Live Nation has announced that they have signed an extensive deal with rockers Nickelback. The addition of Nickelback to their growing roster, which already includes Madonna, Jay-Z and Shakira, is the fourth major coup for the promoter this year, putting Live Nation on course to meet their stated goal of signing four to six major artists in 2008.

While the financial details of the deal were not disclosed, it is estimated to be between $50 million to $70 million. To date, the band has sold more than 26 million albums worldwide. The band's most recent 2006/2007 tour sold more than 1.5 million tickets and grossed in excess of $67 million.

"Our relationship with everyone at Road Runner Records has been amazing throughout our career and we look forward to continuing that same great relationship for the remainder of our recording commitment with them," said Nickelback’s Chad Kroeger. "With that said, the Live Nation deal helps us maximize the band's opportunities in all areas of our career. We are excited to be a part of the Live Nation vision and future."

"This deal with Nickelback will enable us to fully capitalize on our vertically integrated platform to connect the band with their fans, monetizing our unparalleled reach to drive revenues and increase overall margins," continued Mr. Rapino. "This partnership is structured to increase our revenue and cash flow potential significantly, while reducing our risk profile. This investment is cross collateralized, spread over multiple years and comprises multiple business opportunities." – CelebrityAccess Staff Writers